Despite still being sick and being on antibiotics, I was signed up for yet another race.  Erik and I ran the Run It Forward Bridge 2 Bridge run in Bremerton on May 28th (which also happened to be Erik's birthday).

Erik had went out the day before and bought us matching tech shirts...aww cute.  The only downfall to the cute shirts were that they were both tank tops, not the best thing on a chilly Saturday morning in the Pacific Northwest.  I still chose to wear the tank along with my running skirt.  I knew that I would get warm once the race started so I threw on a lightweight jacket and hoped for the best.

We got to packet pickup really early and went over to Starbucks to enjoy some coffee and heat before the race.  We had a lot of fun chatting with the barista and another runner at the bar.  I recognized the shirt the runner was wearing as a You Go Girl shirt from last year's race.  We talked about our plans for this year's races.

At race start we were all herded like sheep to the meeting spot under the ferry terminal.  Good thing we followed, I would have never looked under there for the start of the race.  The Bremerton High School football coach and the Bremerton mayor said some nice opening comments then they sounded the whistle.  We began the run by going through the new tunnel.  It's very beautiful in there...but the GPS doesn't work AT ALL!    As we came out of the tunnel, we made a sharp 90 degree turn onto Burwell.

On Washington, the runners started to spread out.  Thank goodness!  The sidewalks here were all in disarray.  I was averaging a good pace for the first mile but knew I wouldn't be able to keep it the whole way through.  My throat was starting to swell up.  We crossed over the Manette Bridge and made the turn towards the first big hill.  Average pace: 9'05"/mile

At the Bremerton YMCA, I had to finally stop and take my jacket off.  I also pulled a cough drop out of my pocket and enjoyed some relief on my throat.  Erik was kind enough to walk with me through this pit stop.  I told him to keep going but he insisted on waiting for me.  Up, up, up the long steady hill...slow and steady.  I kept telling myself, "This is what you train for!  This is where others stop and you can gain on them!"  It was true.  I passed others that had slowed to a walk.  I may not have been going very fast but it was faster than walking.  Average pace: 9'25"/mile

I finally convinced Erik to keep running his pace because I knew I was struggling.  He kept going and looked great!  This was his first race in months and he felt good.  As I approached the Warren Avenue Bridge, I knew there was one last hill to conquer.  My throat was so swollen at this point despite the cough drop and I was really struggling to breathe.  I took the hill in intervals.  I would run light post to light post, then walk light post to light post.  This was the last time I saw Erik until the end of the race.  Average pace: 9'50"/mile

Once I got onto Warren Bridge...I ran!  It was a wonderful downhill grade with a nice breeze.  The cough drop was finally doing it's job and I had an airway.  I cruised along and headed towards the home stretch.  As I made the turn towards Evergreen State Park, I passed a father and daughter.  The daughter was only 9 years old and she looked so upset that she was walking.  I encouraged her as I ran by and she started to pick up the pace.

One last hill to get up then it was back onto the bad sidewalks of Washington and back to the ferry terminal.  I kept telling myself, "Finish strong!  You can rest when it's over!"  My body must have been listening because I ran with everything I had.  I could see the race clock and it was counting towards 40 minutes.  I wanted to finish in under 40 so I ran!  As I crossed the finish line, my average pace on my GPS said 7'33"/mile.

The race clock said I had finished at 39'54".  I wonder what it will be like to run a race healthy again?  I know I have more in me and I hated having to walk in a 4.4 mile race.  On the plus side, That is just over 5 minutes more than my very first ever 5K so...  I can't complain too much.  To be able to run almost 1.5 miles more in almost the same time shows progress.  That is what really matters to me.

Erik finished the race 4th in his age group and 33rd overall.  I finished 7th or 8th in my age group and 49th overall.  I'm sure if Erik wouldn't have stayed with me in the beginning he would have easily been in the top 3 in his age group but he is a great husband who is always thinking of others first.  Next year, I plan on being healthy and kicking this race's butt! 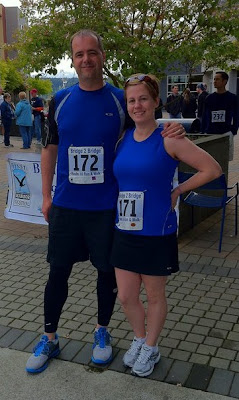 Sharon
I am a running and spin bike obsessed wife and mother of 4 who pays the bills as a full time ophthalmology medical technician. I am also Half Fanatic #905 and Marathon Maniac #5532!